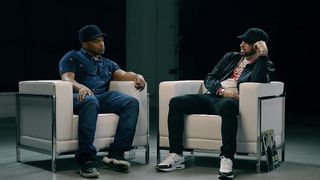 While Eminem has never been one to typically censor himself, part three of his Kamikaze interview with Sway sees the Detroit rapper speak on a moment where he and Dr. Dre admitted he went “too far.” Among the call outs that appeared on “Fall,” the rapper revealed he was most apologetic for the homophobic shots directed at Tyler, the Creator, and Earl Sweatshirt.

“I really did like ’em. I thought their movement was really cool,” he told Sway. “I just felt like there was a mutual respect. Listen, man, you don’t have to like it and it can really suck, but being that somebody really was cool to you, you would expect some kind of reciprocation. Just don’t go public with it.” Adding, “I chalk it up to them being young and just kids. I’ve been there. I was a dick when I first came out.”

Earlier, the rapper explained that his anger stemmed from a tweet in which Earl Sweatshirt said that Shady’s fans drink too much Mountain Dew, followed by another tweet in which Tyler expressed his dislike of Em’s “Walk on Water” collaboration with Beyoncé.

“I was angry when I said the shit about Tyler,” he laments. “The word that I called him on that song was one of the things where I felt like, this might be too far. Because in my quest to hurt him, I realized that I was hurting a lot of other people by saying it.”

In a preview of part four, Eminem addresses whether or not he called out Drake. Stay tuned for that, and make sure to watch part three above.

In other music news, Noname’s new album ’25’ is available to stream.

How the Artist Behind Tyler, the Creator’s Alternate ‘IGOR’ Cover Deals With Tourette’s Syndrome
DesignsponsoredMay 8, 2019