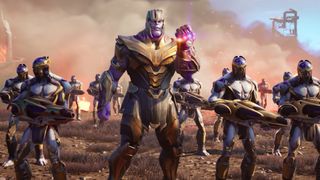 The Fortnite x Avengers: Endgame crossover has been officially unveiled following the release of a brief teaser poster earlier this week. As a follow-up to last year’s Avengers: Infinity War with a playable Thanos, the Mad Titan is back, this time backed by a team of Chitauri warriors and opposed by a team of heroes wielding Avengers weapons.

Take on Thanos and the Chitauri by wielding Avengers: Endgame items scattered throughout the Battle Royale island 🗺️

Unlike last year’s theme with one player as Thanos facing against everyone else, the Fortnite Engame crossover spotlights teams battling it out over acquiring the Infinity Stones. The hero team attempts to eliminate the Chitauri forces and defeating Thanos, while the villain team is tasked with recovering all six Infinity Stones that are scattered across the map.

According to Fortnite, the patch notes for this update reveals that each time an Infinity Stone is acquired, Thanos’ abilities grow powerful and the Chitauri gain health.

Additionally, players can complete challenges to unlock free Avengers-themed rewards like banners, sprays and the Avengers Quinjet Glider. Furthermore, there are new costumes to acquire, such as Black Widow’s signature outfit.

We’re in the endgame now.

Let me put you on hold 🕷️

For more details, head over to the Fortnite Endgame landing page, or just start playing the game.

‘Fortnite’ Is Releasing an ‘Avengers’ Crossover This Week
LifestylesponsoredApril 22, 2019

This ‘Avengers: Endgame’ Trailer Is a Nostalgic Trip Through Every MCU Film
MoviessponsoredApril 17, 2019