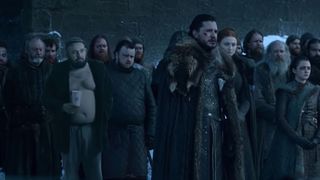 A deepfake video has surfaced online that shows Jon Snow apologizing for the deficiencies in Game of Thrones‘ final season. The video above was created by Eating Things, a YouTube channel ordinarily focused on eating food in the middle of famous movie scenes.

Game of Thrones fans have been vocal about their disappointment with the final season, even petitioning for season eight to be rewritten. With Jon Snow’s “apology” approaching 1.5 million views in just three days, it seems there is still plenty of resentment out there.

In the deepfake video, Jon apologizes for the writing, editing, and the season in general. The one-time King in the North addresses his followers with the concession, “When the Starbucks cup is the smallest mistake, you know you fucked up. We take the blame. I’m sorry we wrote this in, like, six days or something. Now, let us burn the script of season eight and just forget it forever. Fuck season eight!”

‘Game of Thrones’ Actor Says He Almost Donated to a Petition to Remake the Ending
MoviessponsoredAugust 16, 2020