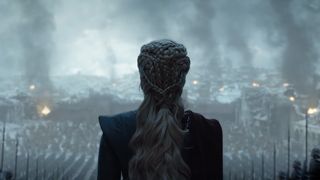 Last night’s episode of Game of Thrones, titled “The Bells,” brought chaos to King’s Landing, and now HBO has dropped the final trailer for the season, giving us a sneak peek at the aftermath of the battle.

The short 30-second clip shows Arya and Tyrion wandering through the remains of the city, before Daenerys walks out to survey her destruction.

Take a look at the teaser trailer above and let us know what you think in the comments below. The final episode of Game of Thrones airs Sunday at 9 p.m. on HBO.

Now, check out the best memes and reactions from last night’s ‘Game of Thrones.’