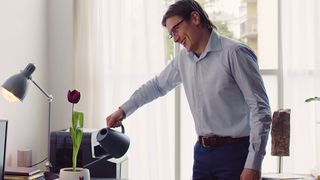 Google has just unveiled its latest Google Home update, Google Tulip, a feature that lets you communicate with your flowers. Drawing from scientific evidence that plants communicate with each other, according to the video above, the tech company claims to have harnessed the communicative potential of flowers to help us talk to the humble tulip.

Google is always down for an April Fools’ Day prank and given that Google Tulip is only available April 1st, it’s safe to assume that it’s part of the festivities, alongside: Snake for Google Maps (which, honestly, we want to play), a screen cleaner in the Files app, and spoon-bending for Gboard.

Back in 2010, Google pulled a similar prank with “Google Translate for Animals,” which claimed to let people speak with a range of different animals. Relive the old-school April Fool (and old-school phones) below.

The Tech to Help Bring the Halloween Haunt to Your Home
SelectssponsoredOctober 17, 2019

A Starter Kit for Spending Valentine’s Day at Home
SelectssponsoredFebruary 7, 2020