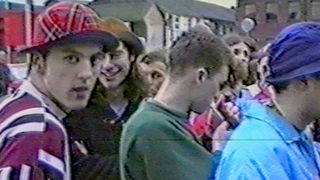 Part two in Gucci and Frieze’s Second Summer of Love series is coming to television. The film titled Everybody in the Place: An Incomplete History of Britain 1984-1993 is directed by Turner-winning artist Jeremy Deller and will air on BBC 4,  Friday, August 2. Take a look at the trailer above.

Everybody in the Place, which came out in 2018, calls into questions many of the long-held assumptions about the genesis of the rave and acid house revolution. It looks to the extraordinary social changes that were taking place in 1980s Britain, and how factors such as protest movements, illegal warehouse raves, Thatcherite politics and creeping neoliberalisms impacted rave culture. He draws on a rich archive of rare and unseen materials to document the large open-air raves between 1988 and 1990 and the ensuing late 1993 crackdown that hampered the movement.

15 Drops
The 15 Best Products to Drop This Week & Where to Buy Them
SelectssponsoredJune 16, 2019

15 Drops
The 15 Best Products to Drop This Week & Where to Buy Them
SelectssponsoredApril 28, 2019

Gucci’s Ultrapace Sneaker Drops This Week, Here’s Where to Cop It
SneakerssponsoredAugust 6, 2019