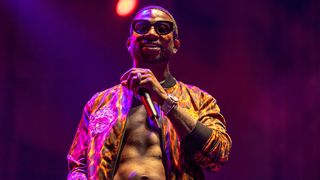 As advertised, Gucci Mane this week drops off his new collaboration with Bruno Mars and Kodak Black, “Wake Up in the Sky.”

The triple threat effort sees Bruno Mars taking care of the hook, while Guwop and Kodak then provide respective verses. Expect this one to get a ton of radio play, but beforehand, you can stream “Wake Up in the Sky” above.

Earlier this week Gucci showed off his insane jewelry collection.

For more music, YG fires shots at 6ix9ine in his newly-released “Bulletproof” video.

Cardi B & Bruno Mars’ Chemistry Is Undeniable in Video for “Please Me”
MusicsponsoredMarch 1, 2019
Follow
Highsnobiety Music
What To Read Next
Load More
Search Results
Load More