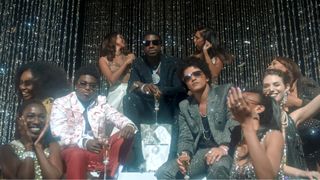 Gucci Mane, Bruno Mars, and Kodak Black are living their best lives in the new music video for “Wake Up in the Sky”. It’s giving us “Everybody (C.O.L.O.U.R.S)” video vibes as all three artists don glittery suits, dripping in ice, and a few choreographed dance moves thrown in. The lavish visual also features nods to nostalgic R&B acts with the vintage microphones and stage design.

Instead of Fonsworth Bentley, Kanye West, and Andre 3000, the “Wake Up in the Sky” trio sing, rap, and celebrate the good life like kids who just opened up a slew of fire presents on Christmas morning. All is right with the world for three to four minutes.

“Wake Up in the Sky” is presumably the first single from Gucci Mane’s forthcoming album Evil Genius, due out by the end of 2018. As far as the unique music group, Gucci Mane is ready to make it official. “We need a name for our group????” the rapper asked, sharing a still from the music video.

Would you be down for a collaborative album between these three?

Cardi B & Bruno Mars’ Chemistry Is Undeniable in Video for “Please Me”
MusicsponsoredMarch 1, 2019