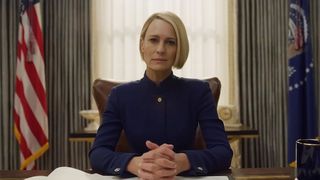 Yesterday, Netflix released the trailer for the sixth, final, and Kevin Spacey-less season of House of Cards. The two-minute teaser focuses almost entirely on new President Claire Underwood (Robin Wright) and her struggle for power in the White House.

While a previous teaser had hinted at Francis Underwood’s death, the new trailer makes little mention of Spacey’s character following a series of sexual misconduct allegations against the actor.

In this trailer, which you can view above, Claire Underwood seeks to consolidate her power as POTUS, but faces pushback from the media and various political figures. Judging by the trailer, the final season of House of Cards looks to be one of the series’ most intense.

Watch the trailer above and leave your thoughts on the upcoming season in the comments.

In other news, Volkswagen has confirmed a commercial release for its electric I.D. Buzz Cargo van. Find out more here.