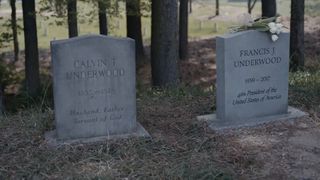 Netflix has released a new teaser for the final season of House of Cards via Twitter on Wednesday with a short and bold caption, “You should have known.”

You should have known. pic.twitter.com/UFGplyDSY1

The 24-second clip above indicates that Kevin Spacey‘s character Frank Underwood has been killed off, depicting a scene with his gravestone and a short monologue from his wife Claire Underwood. The death of Kevin Spacey’s character was inevitable, following the allegations of sexual misconduct and dismissal of his role as Frank Underwood last November.

While it’s still unclear who or what killed Frank Underwood, viewers will have to wait until next month when the series returns for its final season, to find out. Last December, it was announced that House of Cards would resume production without Kevin Spacey after Netflix parted ways with the actor in November.

The final season of House of Cards hits Netflix on November 2.

Up next, Netflix shares the season five trailer of ‘BoJack Horseman.’