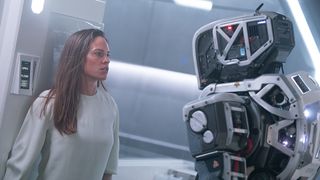 Academy Award-winner Hilary Swank stars in Netflix‘s new sci-fi thriller, I Am Mother. Prior to the film’s release this summer, Netflix shares the official trailer for the anticipated picture.

"Mothers need time to learn." I Am Mother coming to Netflix June 7. pic.twitter.com/FgKT0ygzhg

Alongside Swank, Clara Rugaard stars as a teenage girl called Daughter who has been raised by a robot called Mother (voiced by Rose Byrne) to repopulate a decimated Earth. Daughter quickly finds out that humans may not be extinct after all when an injured stranger (Hilary Swank) finds her way into the fold. Now the unique bond between Mother and Daughter is threatened as the stranger informs Daughter of a world she’d been told was nonexistent.

I am Mother was director Grant Sputore, written by Michael Lloyd Green, and will land on Netflix June 7.