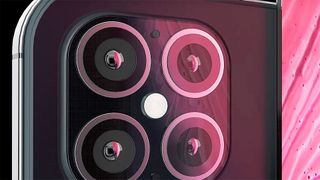 It looks like Apple‘s recently-released iPhone 11 is already old news. New concept art of the iPhone 12 has dropped online courtesy of PhoneArena and it looks like the next generation cellphone is set to get a complete makeover. Take a close look in the video above.

The concept art draws from previous speculation from analyst Ming-Chi Kuo. Based on that, the phone is expected to move away from iPhone’s current soft-cornered design. Instead, it could move towards something more sharper – a boxy shape reminiscent of the iPhone 4 and 5, and not too dissimilar to the new iPad Pro.

While not reflected in the concept art, there are two conflicting rumors about the notch in the iPhone 12 design. According to one report,  the phone will have no notch, thicker bezels, a TrueDepth Face ID camera, earpiece, and front-facing camera. But others say that the notch will remain, it will just be slightly smaller than the current design.

hat’s more, this could be Apple’s first quad-camera phone built from one wide camera lens, an ultra wide camera lens, telephoto camera, and a Time-of-Flight camera (ToF). The latter works in partnership with an infrared light, which emits a light signal that bounces off a subject and back into the sensor. It then calculates the bounce-back time, which is said to vastly improve image depth.

#iPhone12 concept renders based on early leaks. Check out all of them here: https://t.co/gP0yGM5syw pic.twitter.com/C83DFKnhnX

This iPhone 12 Concept Is the All-Screen Smartphone You’ve Been Waiting For
DesignsponsoredMarch 29, 2019

Apple’s New iPhone SE 2 Will Be Cheaper but Equally as Powerful as the iPhone 11
DesignsponsoredOctober 4, 2019
Follow
Highsnobiety Design
What To Read Next
Load More
Search Results
Load More