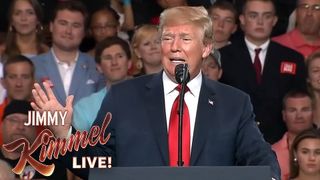 Jimmy Kimmel has responded to claims made by President Donald Trump that, regardless of what the show host says about him now, there was a time when Kimmel would bend over backward to welcome him. These comments, Kimmel says, are false.

At a Republican rally in South Carolina last month, Trump told attendees a story of how a “no talent” Kimmel would stand on the sidewalk waiting for him arrive, to open the door and generally attend to Trump’s needs.

“That never happened,” Kimmel states in the video above. “It’s a funny thing, we all know, even the people who like the president know he makes things up, but still it’s weird to hear him tell a lie that specifically involves you.”

In response, Kimmel told his own version of the story — one that he claims to be as factual as the Trump version of events. It involves POTUS defecating in a fried chicken bucket. Watch Kimmel’s response in full in the video up top.

What do you think of Kimmel’s response? Let us know in the comments.