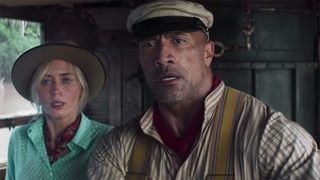 Disney is releasing a new movie based on Disneyland’s Amazon jungle expedition theme park ride, Jungle Cruise. The film stars Dwayne Johnson and Emily Blunt, as today we get our first look at the upcoming picture.

Johnson portrays a charismatic riverboat captain in Jungle Cruise, one propositioned by Emily Blunt’s character, a determined explorer on a research mission, to take her down river. Edgar Ramirez, Jack Whitehall, Jesse Plemons, and Paul Giamatti feature alongside Johnson and Blunt in the movie, which is directed by Jaume Collet-Serra. Johnson also serves as a producer with John Davis, John Fox, Hiram Garcia, Dany Garcia, and Beau Flynn, while Doug Merrifield executive produces.

Jungle Cruise is scheduled to release in US theaters July 24, 2020.

Dwayne Johnson Confirms That ‘Hobbs & Shaw 2’ Is in the Works
MoviessponsoredMarch 31, 2020