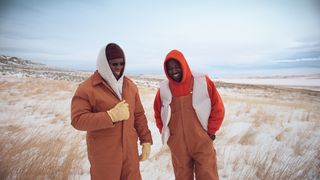 Following a teaser courtesy of Kim Kardashian, Kanye West releases the music video for Jesus Is King track, “Follow God.” The visual arrives as West recently spoke at the Fast Company Innovation Festival, where he discussed running for president in 2024 and his YEEZY Clogs being partly made from algae.

Coinciding with key lyrics from the track, in which Kanye raps “Screaming at my Dad, and he told me, ‘It ain’t Christ-like,’” the “Follow God” video stars Ye’s father, Ray West. The two are seen riding side-by-side in an ATV out in Wyoming.

After watching West’s “Follow God” video above, you can then revisit Jesus Is King, his ninth consecutive album to debut at number one on Billboard, below.

Here’s What Went Down at Kanye’s ‘Jesus Is King’ Live Experience in Detroit
MusicsponsoredSeptember 27, 2019