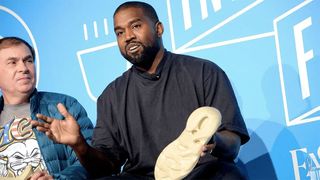 So, Kanye West has concrete plans to run for presidency in 2024. During the 2019 Fast Company Innovation Festival this week, Kanye told the crowd that actually he doesn’t think he’ll have run for the position, he plans to walk.

Kanye was there primarily to discuss his YEEZY empire, taking to the stage alongside sneaker designer Steven Smith. They were talking about sustainable practices and bringing jobs to the US before Kanye moved on to explain how the brand would help his presidential run.

“When I run for president in 2024, we would create so many jobs that I’m not going to run, I’m going to walk,” he told the crowd (around the 24:30 minute mark in the video up top). “What I’m saying is, when y’all read headlines—’Kanye’s crazy,’ this and that—one in three African Americans are in jail and all the celebrities are in jail also ’cause they can’t say nothing, they got no opinion, they’re so scared!”

On the topic of black empowerment and speaking his truth, Kanye said, “Martin Luther King didn’t get killed because he had a dream; he had something else he was gonna to talk about: black empowerment, economic empowerment.”

In terms of his own wealth, he added, “When people say it’s crass to call yourself a billionaire, I say I might legally change my name to ‘Christian Genius Billionaire Kanye West’ for a year until y’all understand exactly what it is … It will be on the license plate.”

Watch Kanye’s full speech in the video above.

Everything We Learned From Kanye West’s Chaotic 2020 Campaign Launch
LifestylesponsoredJuly 20, 2020