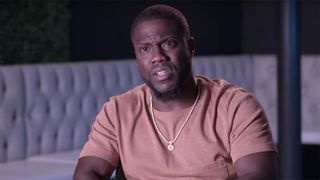 Following his Irresponsible special, Kevin Hart has landed a new Netflix docu-series, titled Don’t F**k This Up. Today we get our first look at the upcoming six-part program, which comes to the streaming service at the end of December.

Don’t F**k This Up provides viewers with a behind-the-scenes look at Hart’s life over the past year, detailing what it means to be a father, partner, role model, and businessman. Throughout the series, the comic reflects on specific events that have shaped his life, including the Oscars controversy and his marriage, as well as his career in general. Not only will we get to see how Hart deals with day-to-day adversity, but the show also includes interviews with those closest to the entertainer, in addition to home videos and footage from his early stand-up days.

Press play above for a glimpse at what to expect from Kevin Hart’s new Netflix docu-series, Don’t F**k This Up, which releases December 27.

I have lived my life as an open book…I have forever told my stories on stage and tried my best to give my fans as much of me as possible…I honestly believe in transparency….I believe in being ok with the ups & downs that come with life. The goal is to grow & to improve & become the best version of yourself possible. This Documentary will give you guys an unbelievably close look into my life in a way that I have never shown before. This is my story….the good the bad and the ugly!!!! Make sure you tune in Dec 27th on Netflix!!!!!! #DontFuckThisUp

Kevin Smith Is Working on a New ‘He-Man’ Anime Series for Netflix
MoviessponsoredAugust 19, 2019