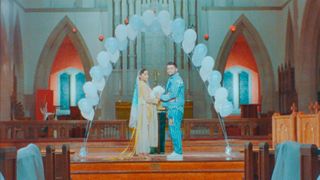 To celebrate the successful drop of its latest collection, KidSuper has released an audio-visual lookbook that parodies popular 2005 Vince Vaughan and Owen Wilson movie, Wedding Crashers.

Dillane, who was featured in Highsnobiety’s Gram Gen series last year, started KidSuper out of his dorm room at New York University in 2011 and has quickly become a rising star in New York’s fashion landscape.

KidSuper pieces have been seen on the likes of Young Thug, Rae Sremmurd, and J Balvin to name a few.

Watch the video and check out each of the looks above and then head to KidSuper’s webstore via the link below to shop the collection.

In other news, Zlatan Ibrahimovic tops MLS jersey sales in 2018.

Raised By Wolves Shot Its Latest Lookbook In a Cold War-Era Bunker
StylesponsoredMarch 16, 2020