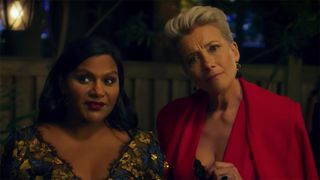 EMMA THOMPSON AND @MINDYKALING (all caps for emphasis). Watch the trailer for @latenightmovie and you'll be just as excited as we are. pic.twitter.com/V3YfaKrDzj

Thompson portrays Katherine Newbury, a tough-as-nails talkshow host with a propensity for firing. As her late night TV program is on a downward spiral, Newbury decides to energize the writers’ room by hiring Molly, played by Kaling. Initially, Molly is brought in for diversification purposes, as the writing staff is made up entirely of men, but after a while, she just may revitalize the show, as well as Katherine’s career.

Nike’s AF1-Type Is a New Breed of Air Force 1
SneakerssponsoredApril 30, 2020