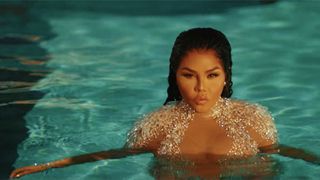 Lil’ Kim just dropped a video for her latest beat-laden track, “Nasty One,” and it brings sexy, tropical vibes in a big way.

Dripping in ice and bright pink feathers, Kim oozes opulence as she dances around a mansion, going for a dip in its pool and then reclining on a giant inflatable clam like the pearl she is.

Describing the video’s feel to Complex yesterday, she said, “The single instantly reminds me of when I use to go to the underground clubs as a teenager. I naturally wanted the video to reflect that with the super sexy Caribbean vibe, vivid colors and the dancing.” She continued, “When my fans watch the video, I want them to ultimately jump up and groove with it.”

Check the video out up top, and let us know whether it made you groove in the comments.