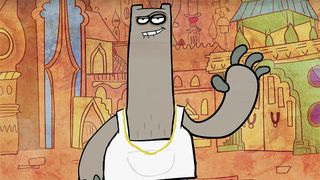 Lil Nas X has just dropped a fresh remix of his track “Panini,” this time featuring a guest verse from DaBaby. The remix arrives alongside an official Chowder animated video, which brings back beloved characters from the Cartoon Network classic. Watch above.

DaBaby offers a new verse to “Panini” and it finds him dropping lines like, “She knows I injured my right hand so when I get behind I use my left / She watched that Walker Texas Ranger, say I remind her of Nas X.”

Of course this isn’t the only collab DaBaby has been part of recently, over the last few months he’s linked up with Lizzo on a remix of “Truth Hurts,” with Chance the Rapper on “Hot Shower,” and on Megan Thee Stallion’s track “Cash Shit.”