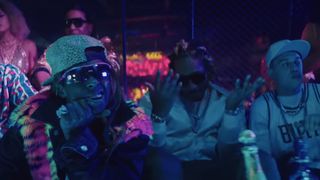 On last night’s episode of Saturday Night Live, Lil Wayne and Future rapped about consent and respecting women in a skit with The Booty Kings (Chris Redd, Kenan Thompson) and Uncle Butt (Pete Davidson). This is Lil Wayne’s first appearance as a musical guest on SNL in eight years, and it did not disappoint.

Fans were impressed with Weezy’s flow, despite it being just a skit, with lyrics such as: “Respect the lady so I treat ya like an equal / Got me staring at that booty like an eagle / Yeah I see you.” Future also stayed respectful with his bars, but his best moment has to be when he’s making it rain in the Women’s Rights Fund.

Lil Wayne also treated us to live performances of two songs off his latest album Tha Carter V, bringing in Halsey for “Can’t Be Broken” and Swizz Beatz for “Uproar.” Watch both songs below.

What did you think of Lil Wayne and Future’s progressive rapping? Let us know your favorite moment in the comments.

Watch Every Imaginable ‘Game of Thrones’ Spin-Off on ‘SNL’
MoviessponsoredApril 7, 2019