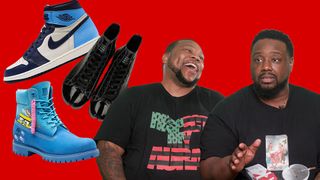 Following an episode with YouTuber Unknown Vlogs, hip-hop duo Little Brother appears on this week’s episode of Cop or Drop. In case you’re unfamiliar, Cop or Drop sees guests reacting to various on-trend items, as they tell us if they’d be willing to spend their money on a particular selection of products.

Phonte and Big Pooh of Little Brother insist they wouldn’t drop a grand on a T-shirt unless Rihanna slept in it, while also proclaiming that no one wants shoes that separate your toes, a la Maison Margiela’s Tabi High-Tops. The two rappers then disagree on whether SpongeBob Timberlands are cool or not, but are of the same opinion on Prada’s Lux Calf Leather Jacket, an entire Source magazine collection, and “Obsidian” Air Jordan 1s. Lastly, both Phonte and Big Pooh are hilariously outraged that something like French’s X Coolhaus Mustard Ice Cream even exists.

To find out exactly what Phonte and Big Pooh of Little Brother would be willing to spend their hard-earned money on, press play above. The duo, which is currently on tour in support of their most recent album, May the Lord Watch, recently launched their official website and line of merch.

You can check out previous episodes of Cop or Drop here.