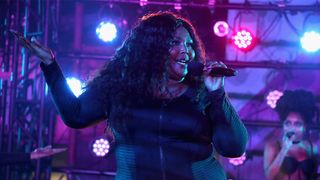 Musical queens Lizzo and Missy Elliott have blessed us today with a new song called “Tempo.”

After the singer teased the single’s imminent release on Twitter yesterday, she dropped the track this morning. Listen to it above.

With a beat that harks back to 2000s Missy Elliott, Lizzo holds her own alongside the hip-hop icon, rapping “Slow songs are for skinny hoes, can’t move all of this here to one of those, I’m a thick bitch I need tempo, fuck it up to the tempo.” Here’s hoping we get to see a “Tempo” video soon.

Speaking to Travis Mills on Apple Music’s Beats 1 back in February, the artist explained how she sent the track to Missy Elliott and just hoped she’d get a verse back. She then revealed that after about 2 months, she “got a Memoji of Missy like smiling and then she just started rapping, and I was like, ‘OMG what the hell’ so I had to hook it up to my speaker system.”

“Tempo” is the third single from Lizzo’s upcoming album Cuz I Love You, out April 19.

Watch Missy Elliott & Lizzo Turn Up the Tempo in Their New Video
MusicsponsoredJuly 27, 2019

Teyana Taylor’s New Album Is As Star-Studded As Her Listening Party
MusicsponsoredJune 16, 2020

Tune in to Our 50 Favorite Tracks of 2019 Playlist
MusicsponsoredDecember 20, 2019
Follow
Highsnobiety Music
What To Read Next
Load More
Search Results
Load More