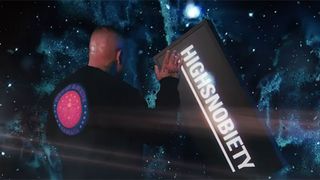 Berlin-based rapper Luciano just dropped a brand new track “Im Plus,” and it references Highsnobiety. In his latest song, Luciano raps about being “im plus,” meaning his bank account is very much in the green. Amidst spitting bars about his beloved Fendi sweater and drinking Hennessy, he says “Highsnobiety” on the hook, and we think it sounds great. He’s also wearing a Highsnobiety x ‘Stranger Things 3’ sweater in the visuals around the 2:20 mark. Check out the video for Luciano’s “Im Plus” above.

This isn’t the first time a rapper has name-dropped Highsnobiety. In 2017, Highsnobiety Magazine Issue 15 cover star Jaden Smith also shouted out Highsnob in his song “ICON” from his album SYRE.

As for Luciano, the German rap star dropped his last project L.O.C.O. in 2018. Stream it below. Luciano will be performing at splash! Festival, where Highsnobiety will be on the ground in Ferropolis, Germany with our own stage, interviews, and more from July 11-13. Get more information here.

Highsnobiety Soundsystem
Get Ready for splash! Festival 2019 With Our Soundsystem Playlist
MusicsponsoredJuly 3, 2019

Here’s What Happened When Skepta and Gunna Came to Shut Down Berlin
MusicsponsoredJuly 17, 2019