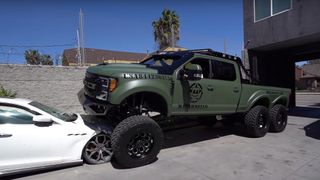 The vehicle was completely redone by RDB LA, and includes Marshmello logos on the doors and bumper. Watch the truck in action as it drives over a Maserati in the video above.

EPIC Video shoot last night… For now get on the YouTube channel and see this monster. #RDBLA

The producer’s 26-foot long vehicle features two extra wheels for a 6×6 conversion. It also packs some Las Vegas-inspired features, such as its Rolls-Royce Starlight Ceiling, which boasts 20 variations of LED lights.

Are the streets ready for this? #RDBLA

This isn’t the 26-year-old’s first big vehicular investment. Take a look at some of the other cars in his garage below.