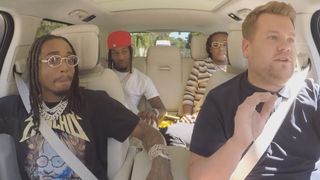 Hip-hop trio Migos will star in James Corden’s popular Carpool Karaoke segment on Tuesday night, and featured above, as well as below, is a preview of what you can expect to see on The Late Late Show via CBS.

In the one-minute clip, we see Quavo taking the coveted shotgun position opposite James Corden who is the chauffeur, as the quartet then begins to engage in a rendition of their hit single, “Walk It Like I Talk It,” while also flexing stacks of cash they brought along for the ride. The crew then goes shopping in a boutique and once they’re back in the vehicle, they enjoy another singing session, this time to Whitney Houston’s “I Wanna Dance With Somebody (Who Loves Me),” with Offset, Takeoff, and Quavo also confirming that they’re the original creators of the dab.

Enjoy the clips above, and catch the episode later tonight on James Corden’s The Late Late Show on CBS.