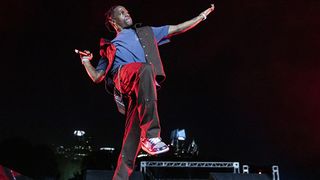 Migos and Travis Scott have collaborated on multiple songs in the past, as this week a previously unheard track from the two has leaked online. Titled “Speaking of the Devils and Angels,” this accounts for the first new tune from Migos and Travis since 2018’s “White Sand.”

The collaborative song features verses from each Migos member, as well as bars from Scott. We hear about the rappers’ abundance of material possessions, in addition to their rise to prominence.

Unfortunately, “Speaking of the Devils and Angels” has been taken down since this article was originally published. The song leaked, however, as Takeoff, Offset, and Quavo have been focusing on their solo careers, while Travis recently injured his knee during a performance at Rolling Loud in New York, and it may require surgery.

This Is How Instagram Is Wearing the New Travis Scott x Nike SB Dunk Low
SneakerssponsoredMarch 4, 2020