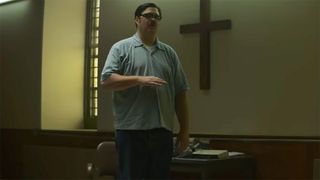 Last week’s teaser trailer for season two of Mindhunter gave us our first look the show’s portrayal of Charles Manson. Netflix is now back with the first full-length trailer for the original program, as this particular clip calls out Manson’s notoriously short stature. Manson, who passed away in 2017 at the age of 83, was just 5’2.”

Jonathan Groff and Holt McCallany star as FBI agents Holden Ford and Bill Tench in Mindhunter, which premiered on Netflix in October 2017. In the show Ford and Tench interrogate the most notorious serial killers to better understand their patterns and behavior.