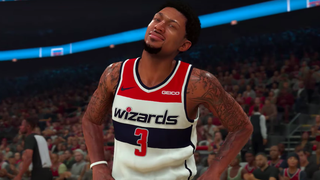 While fans are dying for the NBA season to tip off again, NBA 2K20 is quelling some angst by dropping its first gameplay footage. After an absurd offseason of player movement, the 90-second clip is chockfull of stars in their new uniforms. Anthony Davis on the Lakers, Kawhi Leonard and Paul George on the Clippers, Kevin Durant & Kyrie Irving in Brooklyn, Russell Westbrook in Houston: all there and more for you to salivate over. Oh, and can’t forget about that guy Zion Williamson hammering dunks and stuffing shots in a Pelicans jersey.

The level of detail provided by the players’ signature moves and celebrations is stunning, but the real highlight is Bradley Beal’s reaction to being told he sucks making it into the game.

As one of maybe 11 Wizards fans in Colorado, I thought this was a great moment after the win last night. @BulletsForever pic.twitter.com/L8aTjyp3Hk

Ball Is Luxe: How Fashion Brands Gave Back at NBA All-Star Weekend
StylesponsoredFebruary 19, 2020
What To Read Next
Load More
Search Results
Load More