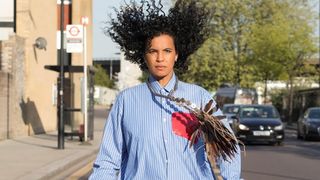 Earlier this month Swedish singer-songwriter Neneh Cherry returned with her first new single in four years. As a followup to “Kong,” Cherry now delivers yet another new tune with “Shotgun Shack.”

On the Four Tet-produced track, Neneh addresses the link between violence and deprivation, as a “shotgun shack” or “shotgun house” was the most common type of house in the Southern United States dating from the end of the Civil War to the 1920s.

“I don’t even remember who said it, but I was like, ‘Shotgun shack! That’s a cool term,'” Cherry said in reference to hearing the idiom at the funeral of late jazz great Ornette Coleman. “It’s about gun culture—the notion of war zones and the tragedies that guns bring there. The dealing of arms. Street culture. The gun is a powerful thing—dangerous, but powerful.”

In addition to the release of “Shotgun Shack,” the 54-year-old musician announces her her fifth solo album, Broken Politics, produced entirely by Four Tet. The LP, which features both “Shotgun Shack” and “Kong,” is due out October 19.

So excited to announce my new album Broken Politics made together with @fourtetkieran is out October 19th. Thank you to @wolfgang_tillmans for the artwork also ❤️. The second single Shot Gun Shack is out today (link in bio). Broken Politics is about these extraordinary times we live in. Telling the stories of what people everywhere endure, because we are left misheard, misunderstood, and disillusioned. It is about feeling broken, disappointed, and sad, but having perseverance. It's a fight against the extinction of free thought and spirit. Thank you to my husband Cameron Mcvey and old friend Karl Berger and 3D @massiveattackofficial whose collaborations are a huge part of the album….Recently I found out that a shotgun shack is an apartment where you can shoot from one end to the other. Gun disaster and its wasted lives are a modern-day tragedy. Inner city communities where living past 25 is a miracle, and I had to talk about that. Bring some humanity back into this crazy world. Neneh x

This “Cherry Blossom” Air Max 95 Is Available in Japan Only
SneakerssponsoredMarch 17, 2020