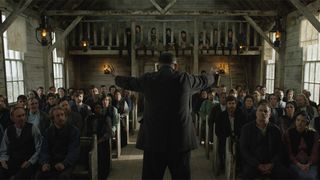 Netflix has given us a look at another of its upcoming original films, Apostle. By Gareth Evans, writer and director of Indonesia’s The Raid franchise, the 1905-set horror flick tells the story of Thomas Richardson, a prodigal son who returns home to find out that his sister has been abducted by a religious group living in solitude.

Michael Sheen is a charismatic cult leader, Dan Stevens is a man desperate to help his sister escape, and Apostle is one of the year’s most horrifying films. pic.twitter.com/FaABwhwIzA

Dan Stevens (Downton Abbey, Legion) stars as Richardson alongside Michael Sheen, who plays Prophet Malcolm, the leader of the cult. To rescue his sister, Richardson must join the religious sect and immerse himself in its teachings.

Apostle comes to Netflix on October 12.