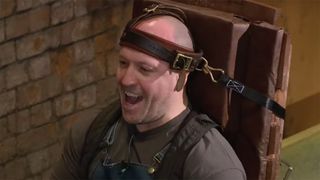 Netflix is prepping the release of its new reality series, scheduled to premiere at the beginning of May. In promotion of the upcoming program, today the streaming service shares the official trailer for Flinch.

Flinch is an action-comedy game show in which contestants are challenged not to do just that, flinch. Set on a remote farm in the hills of Ireland, participants are subjected to a series of nerve-wracking games that test their composure. If they flinch, there are consequences, not only for them, but for the hosts who have chosen a player to represent them.

Netflix compares its new game show to reality programs such as Jackass, Fear Factor, and Impractical Jokers. Consisting of 10 episodes, Flinch premieres on the streaming platform on May 3.