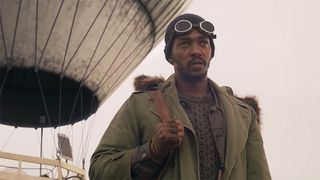 Save the world or leave it behind is the question in Netflix‘s new sci-fi drama IO, starring Avenger Anthony Mackie and Death Note‘s Margaret Qualley. Watch the trailer above.

In the movie, Earth has been hit by a vicious toxicity that renders it uninhabitable. Anyone left alive has relocated to Jupiter’s moon Io, apart from Sam (Qualley), a scientist who remains behind to find a way to save the planet. But her rescue plans are called into question when fellow survivor Micah (Mackie) arrives on the scene, leading to a race to catch the last shuttle to Io.

Want more Netflix? Here’s everything else that’s landing on the streaming platform this month.

Anthony Hopkins Finds Himself in a Papal Feud in Netflix’s ‘The Two Popes’
MoviessponsoredAugust 29, 2019
What To Read Next
Load More
Search Results
Load More