When it comes to sports heritage and its accompanying mementos, there’s no denying that New Era’s got skin in the game. The company’s influence on sport and street culture is indisputable, and as the official on-field cap of the MLB for the past 25 years and counting, New Era maintains licensing footholds with virtually every major sporting league today.

Now, the nearly century-old brand is launching its largest and most divergent campaign yet, called “We Who Reign,” celebrating its baseball roots while embracing a new class of creatives spanning not only sport, but music, art, and culture as well.

59FIFTY fitteds, an iconic New Era style, have played especially integral roles in shaping style trends of the early aughts. It was common to spot rappers like 50 Cent or Ludacris rocking a 59FIFTY, and many artists of that era like Fat Joe and The Game even collaborated on exclusive caps.

The “We Who Reign” campaign juxtaposes figures of traditional kings and queens with those of today’s reigning cultural ambassadors, all while rocking their modern day ‘crowns’— New Era’s Authentic Collection 59FIFTY.

The campaign’s all-star cast includes not only leading athletes but some of the most talented creators in our world. Rappers Big Sean, A$AP Ferg, & Dave East, DJs CoCo & Breezy and Kitty Cash, as well as YG and Mike WiLL Made-it are just some of the creative players in this campaign who are telling their own stories while repping their favorite team or city.

New Era and the 59FIFTY celebrates this diversity while its own history serves as a versatile proving ground for showing how a ball cap can bring all types of people together. Watch the full creative for “We Who Reign” and find your city at neweracap.com. 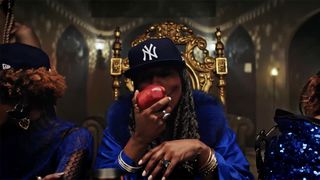