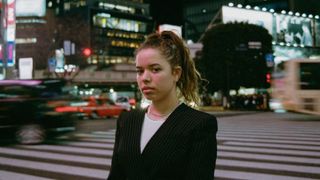 In the clip, Yanya’s harmonious voice carries the textured, complex instrumentals into another level, while it’s sequenced with the foursome taking a trip around Tokyo and enjoying the city at night. The visual also spotlights the glow of neon lights and fast cars, which are distinct fixtures in Japan’s city life.

“We shot the video in Tokyo over New Years,” Yanya says of the video. “Me and my sisters went to visit my brother who is studying there for a year. My sister Molly had the idea for theming the video around street racing cars, which proved to be quite difficult to track down as it’s highly illegal in Japan. We managed to find a few car shows and garages, got some fast rides and had lots of fun. For me this video is really about us as siblings, refusing to let go of each other and our childhood.”

Enjoy the video above, as Nilüfer Yanya is currently on a UK/European tour, while she heads stateside during the latter half of summer. You can catch her in the dates listed below and US tickets can be purchased here.

Lil Baby Stunts in a Helicopter for His “Back On” Music Video
MusicsponsoredOctober 11, 2019