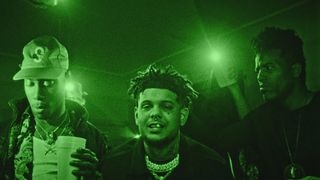 Fresh off the release of last month’s Endorphins mixtape, Octavian has dropped a visual for his Smokepurpp-assisted single “Take It Easy.” The green-tinted visual fits the aesthetic of the previously released video for “No Weakness” which took the psychedelic theme to new heights.

The French-British rapper recently reached a whole new level of stardom with his very own statue on display at the Louis Vuitton store in Los Angeles on Rodeo Drive. Watch the full video above and while you’re here, revisit our review of Endorphins which also includes features from Skepta, A$AP Ferg, Theophilus London, ABRA, and Jessie Ware.

While you guys that used to diss me for being poor buy your LV belts and you little bags, I have a statue in Rodeo Drive Los Angeles that you can Look up to! DONT LET NOBODY PUT YOU DOWN. THE WEIRDER YOU ARE THE BETTER! Thank you @louisvuitton and @virgilabloh #takeiteasy

Highsnobiety Review
Octavian Can’t Be Pinned Down on the Head Rush of ‘Endorphins’
MusicsponsoredJune 18, 2019