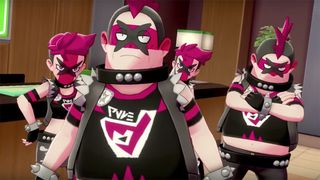 As we are inching towards the November release date for Pokémon Sword and Pokémon Shield, Nintendo and The Pokémon Company today share a trailer highlighting new team members and rivals. We ultimately find out that various Pokémon have been given new Galarian evolutions.

Weezing, Zigzagoon, and Linoone all feature new evolutions in Pokémon Sword and Shield, as Zigzagoon and Linoone look like they’re a part of a KISS tribute band. According to the Pokémon website, Obstagoon’s evolution is now exclusive to the Galar region. This particular Pokémon is known for coaxing his opponents into attacking.

In addition to the form-changing Pokémon, the new Sword and Shield trailer introduces an all-new Pokémon named Morpeko, as well as new rivals Bede and Marnie.

A Powerful Pokémon Is Out for Revenge in Netflix’s ‘Mewtwo Strikes Back—Evolution’
MoviessponsoredJanuary 22, 2020