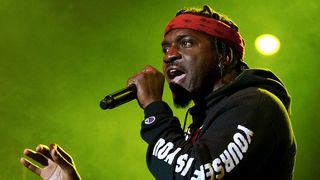 The latest installment in the Pusha-T vs. Drake saga has arrived in the shape of an interview with radio show The Breakfast Club, with Pusha telling Drake “all bets are off” after Drizzy’s “Duppy Freestyle” made reference to Push’s fiancée, Virginia Williams.

The interview runs the gamut of the rappers’ beef-ridden history, with Push commenting, “I definitely didn’t go too far with anything. I’m here for the sport of it, but when it gets personal it gets personal.”

He added, ominously, “I’m not censoring myself but there’s more content if it’s needed later.”

When asked if he’d back down if Drake stopped firing shots, Pusha responded, “Yeah. I’m not going to bully the situation because I think it’s bigger questions now, though, I really do.” Pusha also expressed regret for dragging alleged Drake ghostwriter Quentin Miller into the fight.

Listen to the interview in full above.

Where do you stand on this whole mess? Let us know in the comments.

Confused? Read our brief history of the Drake vs. Pusha-T beef.