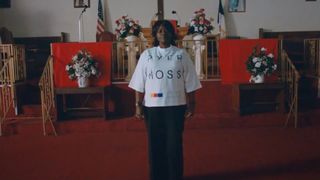 Kerby Jean-Raymond, designer of Pyer Moss, has unveiled a new short film titled Seven Mothers, created in conjunction with Director X. The eight-minute visual is inspired by chapters in Jean-Raymond’s own life, and pays tribute to the seven women who helped raise the designer after the untimely death of his mother at the age of 7.

Dissecting themes of love and strength, the film, which was shot in Brownsville, New York, opens with a funeral scene, then pans to sequences of the seven women that contributed to the growth of Jean-Raymond.

The short film also exchanges nostalgic stories about the designer and his neighborhood, while all characters featured are adorned with Pyer Moss pieces throughout to further promote the designer’s latest SS19 collection which channels decades of black excellence.

Enjoy the video above and for more on Kerby Jean-Raymond, he’s the featured special guest on our latest podcast series The Dropcast (#54), where he delves on a variety of topics including his friendship with Nipsey Hussle and fashion’s dangerous pace.

Pyer Moss’ Collection 2 is now available at select stockists. Head over to the brand’s website for more info.

This weekend— come hang out with us. New deliveries and screenings daily.