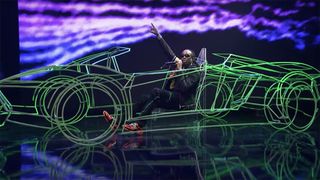 Following the announcement of his debut solo album, Quavo Huncho, Quavo took to The Tonight Show stage last night to perform a pair of tracks from the project. Above you can see the Migos member sitting in a neon Lamborghini, unleashing a medley of previously-released tracks, “L A M B T A L K” and “W O R K I N M E.”

In addition to the performance, Quavo also participated in a word game with Bille Crystal, Jimmy Fallon, and Gisele Bündchen. Press play underneath to witness the competition.

Up next, watch Blood Orange and A$AP Rocky’s newly-released video for “Chewing Gum.”