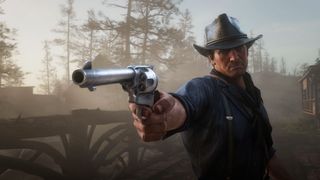 The day has finally arrived! After releasing three cinematic trailers for Red Dead Redemption 2 over the past several months, Rockstar has dropped the official gameplay trailer.

Up until now Rockstar has provided precious few details on how the game will play. In the trailer we finally get a closer look at how the lawless frontier will play out. It’s a gritty, but beautiful living and breathing world. Every choice you make has a some sort of ripple effect throughout the sandbox.

Red Dead Redemption 2 features a vast American landscape to rob, shoot, and travel across. It encompasses everything from harsh mountain trails and dense forests and swamplands, sweeping deserts, rugged livestock towns, and lively cities. Players will be able to move between these locations seamlessly and each one provides a variety of activities, missions, and NPC’s to engage with.

The trailer shows how important your actions are in game. We see how interacting with NPC’s can have substantial effects on the story, or taking care of your base camp reflects how your gang interacts with you. The play now has more control on how this world is shaped and how the NPC’s think of you.

Lastly, we get a first look at sweet SWEET weapon gameplay. Shooting and fighting have been improved to make combat feel deeper, realistic and engaging at all times. Guns now have unique characteristics with realistic reload and recoil for each weapon.