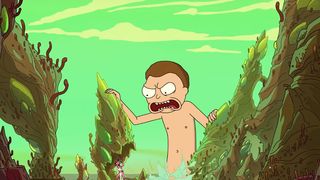 Rick and Morty returns to Adult Swim this Sunday. And as if we needed any more reason to get excited, they’ve released the updated opening title credits for the fourth season.

After a two-year hiatus, we get our best look yet at the highly-anticipated new season. The sequence opens with the familiar scene of Rick and Morty being pursued by giant frog-monsters before Rick makes his escape by opening up a portal for himself.

As in previous seasons, the opening sequence introduces some of the new characters and narrative arcs to come; which this season includes a pugnacious alien-cyborg fighting off snakes, an incensed Morty wreaking havoc on a tiny extraterrestrial lake-community, a two-headed duck, and a full-blown space battle.

Of course, this isn’t the only intel we have, going into season 4. Adult Swim previously unveiled the official episode titles and incredibly vague synopses of the next ten installments.

Catch up on the full trailer before the first episode drops tomorrow.

Two days to get your shit together. Get it all together. @adultswim pic.twitter.com/R4QE9D1BCJ