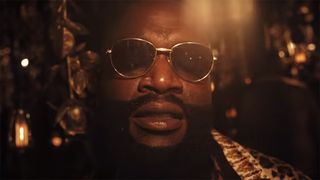 With a New York Times Bestseller on shelves, Rick Ross now revisits his latest album, Port of Miami 2, by sharing the music video for one of the standouts from the LP, “Gold Roses,” featuring Drake.

Ross is seen rapping in a chic modern mansion in his “Gold Roses” clip, which unfortunately doesn’t include Drake. Rozay isn’t alone, however, as he is joined by a femme fatale who watches over him.

“Gold Roses” accounts for the latest collaboration between Rick Ross and Drake, following “Aston Martin Music,” “Lord Knows,” “I’m On One,” and “Money in the Grave.” Again, the track can be found on Ross’ recent album, Port of Miami 2.

Fans of the 43-year-old rapper can catch him on tour in support of the album throughout September and October. See below for dates and locations, and follow here for tickets. Also, be sure to pick up a copy of Ross’ New York Times Bestseller, Hurricanes, if you haven’t yet.

NEW YORK TIMES BESTSELLER 🥇 THANK EVERYONE WHO MADE IT POSSIBLE!!! 📚

Work From Home
These Insane Houses Are Where Your Favorite Celebs Are Self-Isolating
LifestylesponsoredMarch 19, 2020
Follow
Highsnobiety Music
What To Read Next
Load More
Search Results
Load More