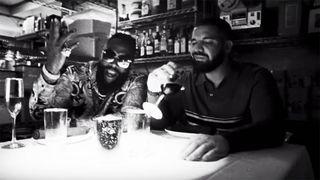 Fresh from releasing Care Package earlier this month, Drake shares the official music video for his recent collaboration with Rick Ross, “Money in the Grave.” The song arrived alongside “Omertà” back in June as a celebratory two-track release commemorating the Toronto Raptors’ first-ever NBA championship.

Drake and Rick Ross both star in the Theo Skudra-directed video for “Money in the Grave,” as they can be seen sipping wine and smoking cigars. The black and white aesthetic also includes footage from one of Drake’s summer concerts.

While Drake dropped Care Package at the beginning of August, Rick Ross more recently delivered Port of Miami 2, of which Drake features on. The album also boasts contributions from the likes of Meek Mill, Lil Wayne, John Legend, and Nipsey Hussle, among others.

Work From Home
These Insane Houses Are Where Your Favorite Celebs Are Self-Isolating
LifestylesponsoredMarch 19, 2020
Follow
Highsnobiety Music
What To Read Next
Load More
Search Results
Load More