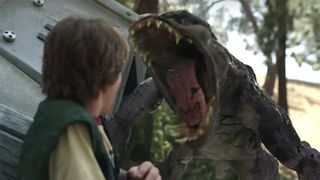 Later this month Netflix will be premiering a new sci-fi adventure film, dubbed Rim of the World. Today the streaming service introduces us to the picture by sharing the official trailer.

Saving the world is child’s play. Watch Rim Of The World on May 24, only on @netflix

Rim of the World tells the story of four misfit teenagers — Alex, ZhenZhen, Dariush, and Gabriel — who are off to Rim of the World for summer camp. Unfortunately, however, they quickly find out that they have more to learn than simply how to canoe and climb ropes, as aliens suddenly invade Earth. Virtually all alone at the camp, with no adults to save the day, this group of friends must utilize a mysterious key that ends up being the means of stopping the invasion.

Jack Gore, Miya Cech, Benjamin Flores Jr., Alessio Scalzotto, and Andrew Bachelor star in the film, which is directed by McG and written by Zack Stentz. You can look forward to Rim of the World coming to Netflix on May 24.