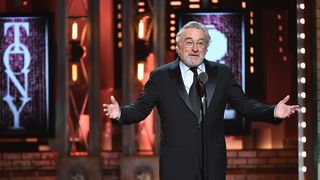 Robert De Niro is the latest in a long line of celebrities to use an awards show as a platform to air their political views, and this one was short and to the point. Taking to the stage at theater’s Tony Awards last night, De Niro summoned the spirit of Travis Bickle with a blunt call of “Fuck Trump.”

On stage to announce Bruce Springsteen’s musical performance, De Niro exclaimed, “I’m going to say one thing: Fuck Trump.” He then punched the air and continued, “It’s no longer ‘Down with Trump.’ It’s ‘Fuck Trump.’” Watch the footage, which has been censored by the network, above.

De Niro’s sentiments received a standing ovation from the crowd.

This isn’t the first time the acting legend has made his thoughts on Donald Trump known. Back in October 2016, when Trump was still a presidential candidate, he urged people to vote against him, saying, “He’s a punk, he’s a dog, he’s a pig, he’s a con, a bullshit artist, a mutt who doesn’t know what he’s talking about, doesn’t do his homework, doesn’t care, thinks he’s gaming society, doesn’t pay his taxes.”

Do you think awards shows are the right time for politics? Do you share De Niro’s sentiments? Let us know in the comments.