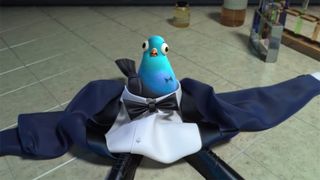 As Spider-Man: Far From Home is out in theaters this week, Tom Holland looks ahead to his next starring role in another type of picture, Disney’s new animated film, Spies in Disguise. The movie isn’t due out until Christmas, but today we showcase the second trailer for the anticipated project.

Holland is joined by Will Smith in Troy Quane and Nick Bruno’s Spies in Disguise, which centers around a debonair spy named Lance Sterling (Smith) and a geeky scientist named Walter Beckett (Holland). The two couldn’t be any more opposite, but due to an unfortunate set of circumstances, Sterling and Beckett are forced to team up for a mission that requires the ultimate disguise, turning Lance into a pigeon.

Press play above for a glimpse at what to expect from Holland and Smith in Spies in Disguise, which comes to theaters on December 25. Ben Mendelsohn, Karen Gillan, Rashida Jones, DJ Khaled, and Masi Oka also feature in the film.