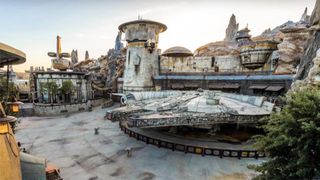 Star Wars: Galaxy’s Edge, Disneyland’s 14-acre Star Wars expansion opens tomorrow, Friday, May 31. To celebrate the monumental occasion, Batuu– the remote trading outpost with a full-size Millennium Falcon– was opened by none other than George Lucas. The Star Wars creator was joined onstage by veterans of the franchise including Mark Hamill, Billy Dee Williams,  and Harrison Ford.

The Walt Disney Company first announced its two Star Wars lands in California and Florida back in 2015 and the extensions have since cost a combined $2 billion according to The New York Times,

Galaxy’s Edge is being touted as the most immersive and ambitious land Disney has ever created. Connor Ennis, who was visiting with his son told The New York Times, “The sense of place they have created is unbelievable,” conceding, “I almost don’t even care if there are rides.”

On May 31, visitors will be able to ride Millennium Falcon: Smuggler’s Run, while Star Wars: Rise of the Resistance is slated to open later this year. Souvenirs from the new area of the park include lightsabers, priced at $199, and functioning droids, starting at $99.

If you’re planning on visiting Galaxy’s Edge between now and June 23, you’ll need a reservation on top of park entry ticket as Disneyland is anticipating record crowds. Even then, your time inside Batuu will be limited to approximately four hours. You can also opt for the almost-identical version at Disney World in Orlando, Florida which is slated to open August 29.

Find out how to visit here.

Yet Another ‘Star Wars’ Movie Is Reportedly In the Works
MoviessponsoredFebruary 22, 2020