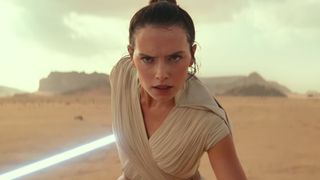 The very first trailer for Star Wars Episode IX is finally here! Revealed at the 2019 Star Wars Celebration in Chicago, the film’s official title, new images and even a new robot has been announced, thanks to Star Wars chief Kathleen Kennedy, writer/director JJ Abrams, and the main cast of the film.

In the trailer, we see Rey preparing for an epic 1-on-1 fight against a mysterious foe in a spaceship. Is it Kylo Ren? Speaking of Ben Solo, the teaser shows him trucking a poor soul and repairing his infamous helmet. We also see many cameos including Lando Calrissian. To end the epic 2-minutes of space glory, we get a mysterious voice that sounds like Luke Skywalker saying, “no one is ever really gone,” followed up by a very questionable laugh that closely resembles Emperor Palpatine. Is he back?!

Completing the Skywalker saga, Star Wars Rise of Skywalker is due out this December, and is rumored to be the last installment in the franchise before going on a hiatus.

‘Star Wars: The Rise of Skywalker’ Reviews Are In & Fans Are Still Totally Split
MoviessponsoredDecember 17, 2019

How to Watch the ‘Star Wars: The Rise Of Skywalker’ Event in ‘Fortnite’ Today
MoviessponsoredDecember 8, 2019
What To Read Next
Load More
Search Results
Load More